Hi, I've been an avid action figure collector since I was a kid in the  late '70's.  This blog will discuss old and figures from my collection and provide some stories, photos and opinions, including some highlights of upcoming figures.

My wife has been kind enough to translate this to Portuguese and we've enjoyed meeting other collectors in Brasil.  If you have a wish list of old, new or upcoming action figures or if you may be interested in trading or selling figures, please don't hesitate to contact me.

Hope you enjoy this and thanks for reading.


For this installment, I'll focus on new figures from MOTU Classics and DC Universe Classics wave 20, along with their friends and enemies.

First up is Demo-Man. The figures shown here are based on Mattel's original concept art for He-Man.  The characters from those early drawings are known as Vikor and Demo-Man from MOTU Classics. 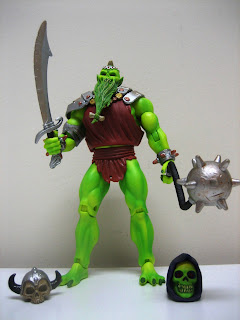 One very cool feature with Demo-Man goes back to the beginings of MOTU. He comes with a Skeletor head based on the art of the original 1982 mini-comics with art by Alfredo Alcala.

Based on the current stories told on the MOTU Classics cardbacks, Keldor was wounded in battle and Hordak merged him with Demo-Man -- turning him into the Skeletor we know and love.

Below is a photo of Skeletor with the new head which comes with Demo-Man (left) next to the standard MOTU Classics Skeletor (right). 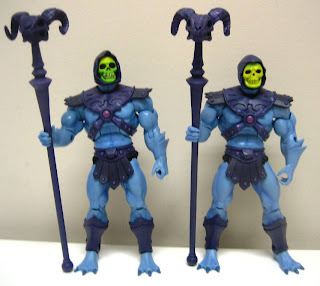 I remember buying Skeletor in 1982 at age 13 from the long-gone Best Products on Western Boulevard in Raleigh, NC.  Skeletor and He-Man were the only figures who were available at that time and I've always been partial to monsters, so Skeletor started my MOTU collection.  It wasn't long before I also got that cool barbarian guy and started what has become a 30-year hobby starting with MOTU in the '80s, then MOTU 2002 and now MOTU Classics.  Well, and even a few 'New Adventures' figures in '89.

So, my introduction to Skeletor was long before the cartoon and the first mini-comic had me hooked. Personally, I couldn't be happier to see this nod to the origins of Masters of the Universe. 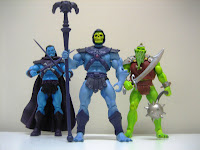 And voila, you have Skeletor - Evil Lord of Destruction! 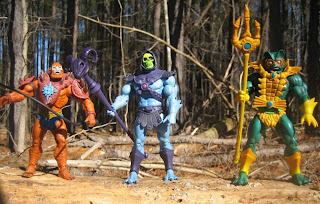 Before we leave Demo-Man and Skeletor, here's a photo of Skeletor with the new head and his original henchmen from 1982, Beast Man and Mer-Man

﻿
﻿ These three characters were planned for Princess of Power in the '80's, but the line was cancelled before they were released.
﻿
﻿﻿
﻿﻿﻿
﻿﻿ 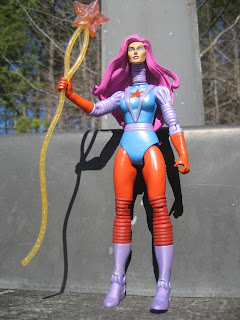 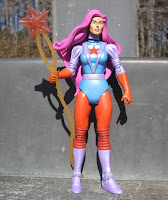 And at right, here's Tallstar when she is not quite so tall  .... 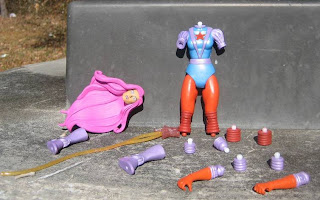 The pieces to extend Tallstar's arms, legs and neck are a first for MOTU Classics.  This design may come in very handy when it's time for figures like Mekaneck, Extendar and Modulok.
The last item I'll cover for this post for MOTU Classics is Battleground Evil-Lyn.  Based on MOTU 2002 colors and design, this is an excellent update of an important character for MOTU.  The alternate head without the helmet and the cape really add a lot to this figure.  The last photo below shows the dramatic differences between the standard MOTU Classics Evil-Lyn and this new version.  Personally, I'm partial to the classic yellow-skinned version, but the new one is a great figure. 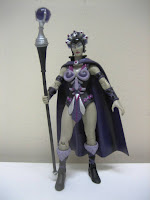 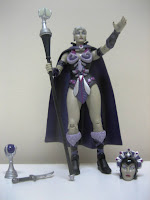 Now, on to DC Universe Claassics Wave 20 which will be the last series at retail before moving over to the DC Infinite Earths monthly subscription stating in April.

First up is Sinestro in his Yellow Lantern costume.  We first had this figure way back in wave 3, but he turned out too short, so this is a nice update.  I've really enjoyed Sinestro and his gang in Green Lantern comics since the Sinestro Corps war and was glad to get them together for this group shot.﻿
﻿﻿﻿﻿﻿﻿﻿﻿﻿
﻿﻿﻿﻿﻿﻿﻿﻿ ﻿

﻿Next up are Hawk and Dove.  I first read these characters back when Don Hall was Dove and before the 'Teen Titans' became the 'New Teen Titans.'  Marv Wolfman and George Perez on 'New Teen Titans' was my favorite comics series in the early '80's, but I'm nostalgic for earlier stories also, including when Hawk and Dove were part of the team.﻿﻿﻿﻿﻿﻿﻿﻿﻿﻿﻿﻿
﻿﻿﻿﻿﻿﻿﻿﻿﻿﻿﻿﻿
Now, since the late '80's, Dawn Grainger has been Dove.  Hawk and Dove's appearances in 'Brightest Day' were a highlight of the series, including Dove's relationship with Deadman/Boston Brand. 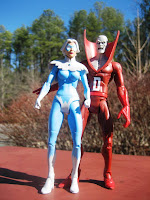 Dove and
her guy
from
'Brightest
Day' ... 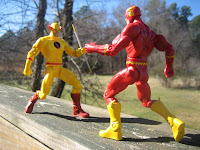 For now, last up is Professor Zoom, the Reverse-Flash.  Like Sinestro, he's a character who has been very well-handled in recent years by writer Geoff Johns.  Flash has an excellent rogues gallery of villains and this guy is the top of the heap.  I also remember how much I enjoyed the run of Flash comics which featured Professor Zoom in the 'Death of Iris Allen' around the early months of 'Crisis on Infinite Earths.'
So, that covers four figures out of seven for wave 20.  Once some bills are paid, I'll pick up Red Arrow, the 'Longbow Hunters' version of Green Arrow and White Lantern Flash.  That will also round out the rest of the pieces for Nekron, who you'll notice below is currently missing a leg and both arms. 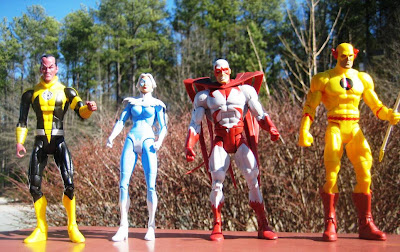 Coming Soon
For the next installment, I'll share photos and thoughts of the Outer Space Men figures as produced by the Four Horsemen and will share information from my visit to their upcoming gallery show 'Futuretro' at Toy Tokyo Underground in New York City.